The World’s First Photograph Ever Taken

The World’s First Photograph Ever Taken

The first photo picture depicting a view from the window at Le Gras was taken in 1825 by a French inventor Joseph Niepce. 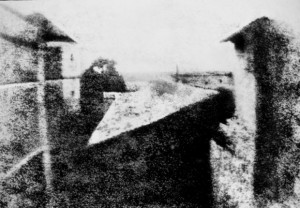 View from the Window at Le Gras, 1826–27 (manually enhanced version) 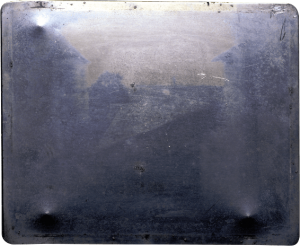 The world’s first photograph, housed in its original presentational frame and sealed within an atmosphere of inert gas in an airtight steel and Plexiglas storage frame, must be viewed under controlled lighting in order for its image to be visible. In general, this procedure requires viewing the plane of the pewter plate at an angle of approximately 30° to the perpendicular and in exact opposition to a point source of light, preferably within a darkened environment free of other incidental light sources.

The view, made from an upper, rear window of the Niépce family home in Burgundy, represents (from left to right): the upper loft (or, so-called “pigeon-house”) of the family house; a pear tree with a patch of sky showing through an opening in the branches; the slanting roof of the barn, with the long roof & low chimney of the bake house behind it; and, on the right, another wing of the family

By that time people already knew how to project pictures, they just didn’t know how to preserve and save light. Niepce came up with the idea of using a petroleum derivative called “Bitumen of Judea”. Bitumen hardens with exposure to light and the unhardened material was then washed away. The metal plate, was then polished rendering a negative image which then was coated with ink producing a print. One of the numerous problems with this method was that the metal plate was heavy, expensive to produce, and took a lot of time to polish.

Photography is an art form invented in 1839. Before photography was created, people already knew the principles of how it eventually got to work. They could process the image on the wall or piece of paper, however no printing was possible as preserving light was lot harder task than projecting it. Around for a few centuries before photography came along, the instrument that people used for processing pictures was called the Camera Obscura (which is Latin for the Dark Room). 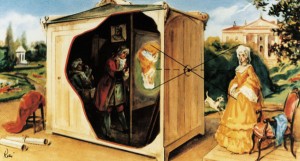 Use of Camera Obscura

Today analogue photography is based on the principles on which camera obscura works. Camera Obscura is essentially a dark, closed box with a hole on one side of it. The hole has to be small enough in proportion to the box to make the camera obscura work properly. It works on the optical laws, the light coming through a tiny hole transforms and creates an image on the surface that it meets, i.e. the wall of the box. The image will be mirrored and upside down. In the mid 16th century, Giovanni Battista della Portacentury, an Italian scholar, wrote an essay on how to use camera obscura to make the drawing process easier. He projected the image of people outside the camera obscura on the canvas inside of it (camera obscura was a rather big room in this case) and then drew over the image.