The first ever scanned Image

The first ever scanned Image

The very first digital photograph was a picture of Russel A. Kirch’s three month old son, Walden. This turned out to be the basis for the satellite imaging, CAT scans, bar codes on packaging, desktop publishing, digital photography and other revolutionary developments in image processing technology.

Rusell A. Kirsch was part of the team of National Bureau of standards (NBS) which developed the Standard’s Eastern Automatic Computer (SEAC), U. S.’s first programmable computer, in 1950. This group created a rotating drum scanner which was used for the digital scans in 1957. The first digital scan was of a 5cm x 5cm square photograph of Russell’s son, Walden. It was a black and white picture captured as just 30,976 pixels, a 176 x 176 array. The original picture is in the Portland Art Museum.

In 2003, Life Magazine named the scanned picture of Kirsch’s son as one of “the 100 photographs that changed the world”. 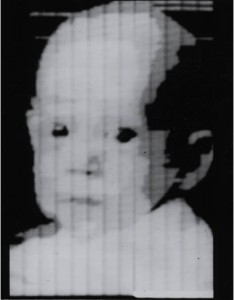