Rare World War I posters to be sold in online auction

Rare World War I posters to be sold in online auction

A collection of about 2,000 posters from the World War I era by US army officer Edward H. McCrahon, considered to be one of the world’s best collections will be sold during an online auction on June 30 and July 1.

About half of the posters are from the US, while others are in various languages from more than 15 countries including France, Italy, Germany, Canada, Cuba and China. All these art works expected to fetch between $200 to $5,000 are patriotic, with topics ranging from fundraising and food rationing to women’s war efforts, enlistment and animal aid.

The famous poster of a stern-looking, top-hatted Uncle Sam pointing a finger with the words “I want you for US army”, is one among them. J. M. Flagg’s 1917 poster, based on the original British Lord Kitchener poster of three years earlier, was used to recruit soldiers for both World War I and World War II. Flagg used a modified version of his own face for Uncle Sam, and veteran Walter Botts provided the pose. 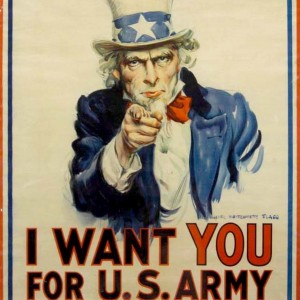 The largest poster is a massive 9 x 14 ft. American work urging people to “Give or Perish,” that was made on behalf of the Armenian Relief Fund.

Largest poster 9-by-14 foot “Give or Perish”

“It appears that from the very beginning it was always looked at as the most comprehensive assemblage of posters of many different nationalities pertaining to their involvement in World War I” said Arlan Ettinger, the president of Guernsey’s.

Edward H. McCrahon, who was born in Brooklyn, started the collection after he joined the French Army in 1917. He became enthralled with the colorful, graphic posters encouraging citizens to support the war and continued collecting after enlisting with the U.S. armed forces. When WWI ended Mr McCrahon devoted all of his time to enlarging the collection, and by the 1930s he began to exhibit it around the country.

“There are many posters in this collection that have never been seen before,” said Ettinger. “It really is a time capsule of a different era, when these things were very stirring, patriotic and treasured,” Ettinger added.