Geological Society Archivists have unearthed “the map that changed the world”, a rare early copy of William Smith’s 1815 geological Map of England and Wales. This is the first geological map of a nation ever produced which shows the geological strata of England, Wales and part of Scotland. The completely restored and digitized map is available on the Geological Society’s Image Library, just in time for the map’s 200th anniversary celebrations.

The newly discovered map is thought to be one of the first ten produced by William Smith (1769-1839), who produced and estimates 370 hand colored copies of the map in his lifetime. William Smith was called the “Father of English Geology”, who developed the science of stratigraphy and geological mapping. The geological surveys around the world were influenced by the map of England and Wales, which also became the basis for all future geological maps of Britain.

‘The map was found among completely unrelated material, so at first I didn’t realize the significance of what I’d uncovered’ says Victoria Woodcock, who founded the map, who was then the Society’s Archive Assistant. ‘Once we had worked out that it was an early copy of one of the earliest geological maps ever made, I was astonished. It’s the kind of thing that anyone working in archives dreams of, and definitely the highlight of my career so far!’

‘Smith’s importance to the history of our science cannot be overstated’ says John Henry, Chair of the Geological Society’s History of Geology Group. ‘His map is a remarkable piece of work. It helped shape the economic and scientific development of Britain, at a time before geological surveys existed.’ 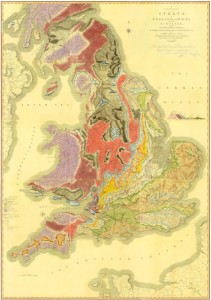