It was in the year 1987 that John Knoll, one of the creators of the original Adobe Photoshop, went on a vacation with his girl friend to Bora Bora. He took the picture of his girl friend, Jennifer on the beach, gazing out at To’opua Island. He called the photograph “Jennifer in Paradise”. Shortly after he took the snap, he proposed her.

Later, as Knoll was working on Pixar Image Computer, he felt that it was very expensive and complex. So John suggested some features to be added to the new software capable of manipulating images that his brother was working on. Once the software was developed they needed digital images to demonstrate it and Knoll ended up using the only picture of his wife that he had at that time, “Jennifer in Paradise”.

This is how Jennifer in Paradise became the first colour photograph used to demonstrate what they are now calling Photoshop. From then on John would use the same image when showing off his software.

For the 20th anniversary of Photoshop in 2010, Adobe made a video of John Knoll working with “Jennifer in Paradise” on Photoshop 1.0.7. (https://www.youtube.com/watch?v=Tda7jCwvSzg) 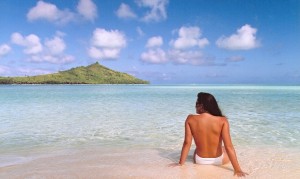