Google opened the largest Russian online archive of letters of more than 800 letters (1941 – 1945) from the war years, “Live memory”. The project was developed by agency Friends Moscow for Google Russia dedicated to the 70th anniversary of the Victory in the great Patriotic war. There are videos where some of the letters received were read out by theatre and movie actors, musicians, athletes, TV presenters and politicians.

Willem Rabe created a typographic illustration made up of characters from around 800 letters serves as the interface to the online archive. As visitors will read letters, words will form an image of a soldier who has returned home from the front, reunited with his son.

“Turning what had been static typeface illustrations into a fully immersive interactive experience was an exciting challenge to me as it required both artistic and technical expertise to yield the results we were aiming for. After receiving the photographic data, I started to work on adjusting the contrast of the photograph, then creating an intricate line drawing featuring every contour, crease, strand of hair and fold within the image,” explains Willem. 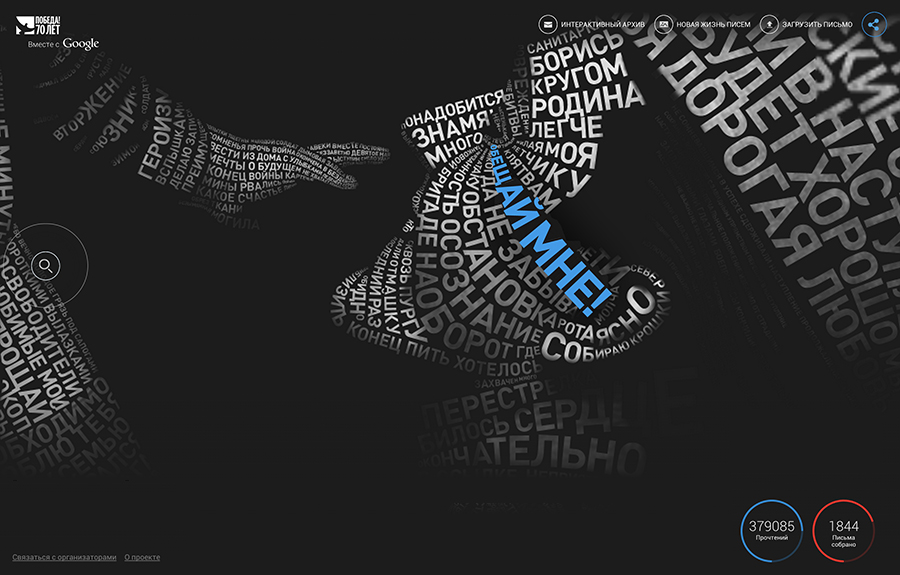 “The process took a hefty hundred hours and involved a lot of manual labor as every letter of every term had to be sized, spaced and in some instances rotated to get the most even overall appearance.

“After completing the process and following a strict protocol all the outlines were converted into a machine readable format and fed into the content management system that powers the interactive archive. This allowed us to later assign terms to letters that would match contextually.”

You can view the videos here: http://pisma.may9.ru/#/archive/video