Wisconsin Veterans Museum has started this digitization project on request for Civil war era photos and documents which is expected to be completed by the end of March 2016. The images will be available on the museum’s website from then on. The project’s purpose is to provide the public an easy way to see the photos and to preserve the fragile images from frequent handling.

The Wisconsin Veteran Museum recently received a $31,000 grant from the Institute of Museum and Library services to digitize the Civil War era photos collection. Digital archivist Duane Rodel is scanning the museum’s collection of more than 2,700 Civil War era images.

The images include daguerreotypes, ambryotyoes, cyanotypes, gemtypes, tintypes, cartes-de-visite, cabinet cards and photo albums picturing Wisconsin soldiers and veterans of Civil War which dates back to 1903 when the Grand Army of the Republic Memorial Hall was founded in Madison, from which evolved the Wisconsin Veterans Museum. Almost all of the photos are studio portraits of which many include the name of the photographer’s studio or tax stamps, which will help to determine where they were taken.

The collection also include the photo of the mascot of the 8th Wisconsin infantry. The eagle pecked the color print with her beak leaving a V-shaped scar. On the back is written – this is Abe’s autograph.

The museum officials would like to digitize photos from every conflict since the Civil War, including 6,000 color photos which portraits the evolution of photography with the evolution of technology. 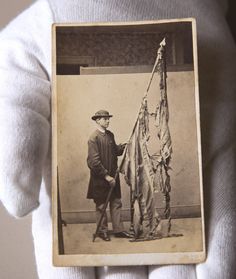