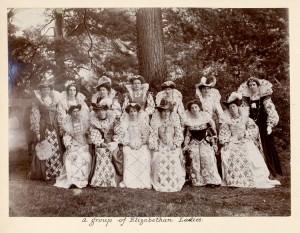 A group of Elizabethan Ladies

Wikimedia UK is a charity to support volunteers in the United Kingdom who work on projects of Wikimedia such as Wikipedia.

History of the Kings – Morgan and Cunedda

Jasons Evans, the Wikipedian in Residence at the National Library of Wales, explains “One of the Library’s key goals over the next few years is to provide ‘Knowledge for All’. We want to make our collections available freely and widely, and sharing material with sites such as Flickr and Wikicommons gives us an opportunity to reach a far wider audience than we could ever hope to reach via our own website alone.”

The images are those from the 15th and 14th century which illustrates and explains the then life of the great kings and also the Welsh manuscripts.

Jason adds, “Everything we release to Wikipedia is also released on an open license ‘Public Domain’ so these images can be reused by anyone for free. This encourages the development of educational and documentary resources. Already images from these manuscripts have generated staggering viewing stats.”

To view the images of the medieval manuscripts, click here.